While it is called T-budding, the process being described is technically an inverted-T. This same procedure is also used to bud a number of woody plants, including all citrus types, peaches, nectarines, plums, apples, grapes, roses and others. T-budding can be done anytime the bark of the rootstock is "slipping", i.e., the bark separates easily from the underlying wood. For citrus in subtropical areas, the bark slips from early spring through late fall. In greenhouse production and in tropical areas, the bark slips anytime the plant is in active growth--which is practically year-round.

In many commercial citrus-growing areas of the U.S. and the world, budwood is collected only from sources that are certified to be free of a number of viral diseases. Quarantines exist to prevent the movement of citrus propagation materials from one region, state or country to another so as to preclude the spread of citrus diseases to other citrus areas. To obtain budwood from any other citrus area is illegal under either state or federal law or both. 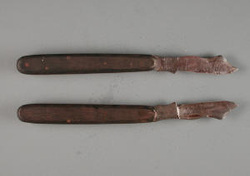 Budding knives are extremely thin-bladed, with both right-handed and left-handed versions. Image 1 shows opposite sides of a typical right-handed budding knife--the side of the blade shown on the upper knife is flat (unground) while the opposite side (the lower knife) is ground down to the cutting edge. Many budders prefer high carbon steel blades (rather than stainless steel) because they are more easily kept sharpened to a razor edge.The best of pocket knives are usually too thick-bladed to use for budding. Utility knives with replaceable razor blades may be the better choice. Blade thinness and sharpness are critical for successful budding, as a thick or dull blade causes jagged cuts which do not "take" readily. 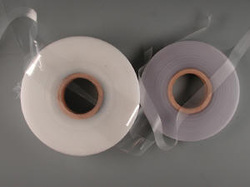 Materials
Most budding tape is either clear, very thin polyethylene (at left in Image 2) or somewhat thicker, opaque polypropylene. For home use, strips can be cut from plastic sandwich bags. Neither electrical nor "Scotch"-type tapes are recommended, though plumber's teflon tape should work. The purpose of the tape is to exert a little pressure on the inserted bud, to keep out excess moisture and to protect the bud while the cut surfaces heal and begin to grow together.Seedling rootstocks of at least pencil diameter are usually the easiest for beginners, although both smaller and much larger stocks can be budded successfully. Image 3 shows three seedlings, all of which are buddable. The seedling on the left was used for most of the subsequent images of the actual budding process.Budwood for home use may be collected from any tree of the desired variety--in most cases from friends, relatives, neighbors or local nurseries. Each of the major citrus-producing states have budwood certification programs which sell virus-free budwood to residents. Because citrus trees typically have four or more growth flushes annually, there should always be usable budwood. 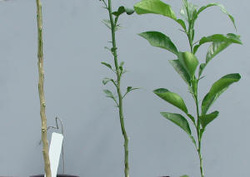 Seedling rootstocks of at least pencil diameter are usually the easiest for beginners, although both smaller and much larger stocks can be budded successfully. Image 3 shows three seedlings, all of which are buddable. The seedling on the left was used for most of the subsequent images of the actual budding process.Budwood for home use may be collected from any tree of the desired variety--in most cases from friends, relatives, neighbors or local nurseries. Each of the major citrus-producing states have budwood certification programs which sell virus-free budwood to residents. Because citrus trees typically have four or more growth flushes annually, there should always be usable budwood. 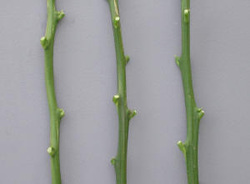 In Image 4, the budstick at left is the best, the middle one can be used with good technique, but the one at right is too angular. Each of these three budsticks represent a different growth flush of the same branch--the one on the left having developed in the early spring, the middle one in late spring and the one at right in mid-summer. If you look closely at the second bud up from the bottom on each budstick, you will see that the bud and surrounding twig on the leftmost budstick is round and plump while that of the rightmost is angular and skinny. If left on the tree, the budstick at right would have looked like the one in the middle after the next growth flush and then like the one on the left after the second growth flush.Budwood should be placed in closeable plastic bags and kept cool until use. For storage longer than a couple of hours, the bag should be placed in the refrigerator. Under such conditions, citrus budwood can be stored for several weeks, if absolutely necessary. 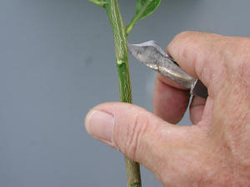 Preparing the stock
Unless local conditions warrant budding very high on the rootstock, about six inches above ground should be adequate. In the area to be budded, carefully clip off all leaves, thorns and side twigs. For optimal success, the area where the bud is to be inserted should be fairly straight with about an inch or so between two remaining leaf bases. This distinction will become clear as you look at the next five images.

5. Making the vertical cut
Image 5 is a side view showing the relatively shallow depth of the point of the budding knife as it starts to make the vertical part of the T-incision. The bark is quite thin and very soft, so a sharp knife easily penetrates and cuts the bark with very little pressure. There is no reason to cut into the wood--with practice, you can "feel" the knife tip as it penetrates the bark and makes contact with the wood. 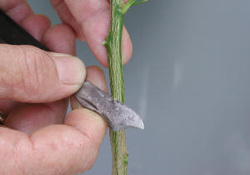 Images 6, 7 and 8 show the progression of the horizontal cut at the bottom of the vertical one. Note that the cutting edge of the blade is angled upward sharply, probably at about 45 degrees. To start the cut, place the blade edge at the left side of the vertical cut as shown in Image 6, press it firmly but lightly into the bark (again, with practice, you can "feel" when the blade penetrates the bark). Maintaining the same light pressure and angle of the blade, "walk" the blade across the stock (do not use a sawing motion!). 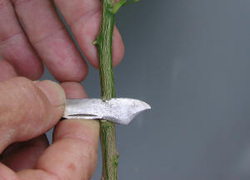 7. Middle of the horizontal cut.

Note the position of the thumb and forefinger in each image, since their position shifts to the right as the cut is completed. In Image 6, the wrist is cocked or bent backward, it is nearly straight in Image 7 and it is slightly curled inward in Image 8--solely by moving the wrist and forearm slightly to the right from beginning to end of the cut. Also, note how the knife edge lifts up the bark during this cut--that is why the blade edge is angled sharply upward. As you examine the completed incision in Image 9, notice that the bark flaps at the bottom of the inverted T are still raised from the stock. These raised flaps provide a guide for easier insertion of the bud. 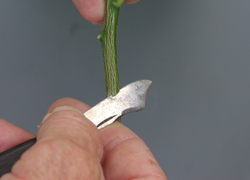 8. Finish of the horizontal cut. 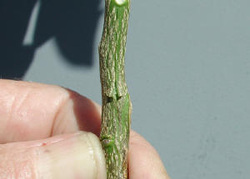